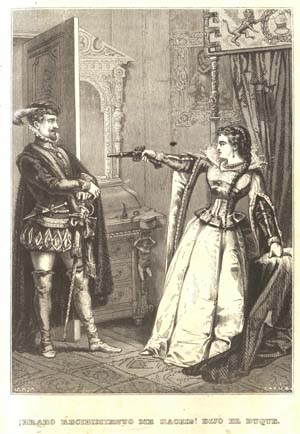 The Oberlin collection of 19th century Spanish novelas historica currently consists of 537 titles and one weekly periodical from the 1870s (El periódico para todos). This collection was purchased 1929–30 in Spain by Oberlin Spanish Professor Cony Sturgis, and subsequently added to library holdings. Most of the volumes, though many are brittle with age, appear to have their original bindings and illustrations intact. A list of authors in the collection is available.

The heyday of the Spanish Romantic novel ran from approximately 1830 to perhaps as late as the 1890s. Scholars point to the return from exile of Spanish liberal thinkers at the beginning of the 1830s, as the start of the Romantic Movement in Spain. Indeed many of the novels from this movement had to be published outside of Spain since they were considered bourgeois, impious, and subversive. Another factor contributing to the rise of the Romantic novel was the very successful translations into Spanish of Walter Scott in 1831–32. Early Spanish works in this genre are excessively similar to those by the Scottish novelist. Other authors imitated were Alexander Dumas, Victor Hugo, Eugène Sué, and George Sand.

Another contributing factor to the Spanish Romantic movement was a rising sense of post-Napoleonic War Spanish pride and nationalism that sought to define itself against the cultural influence of the French Bourbon dynasty and the restrained, conservative, "correctness" of Neoclassical literary form. Indeed, Spanish honor, vengeance, and nationalism are often the vehicles for much of the emotion in the novel plots. The "historical" component is really quite secondary to the generation of feeling and the lessons of morality.

Most of this genre has been passed over by mainstream Hispanic studies in favor of more "serious" forms of writing. What's more, the novelas historicas, like so much of 19th century Gothic fiction, have long been sneered at by the literary establishment as either overly sentimental romance for women, or as a vulgar, melodramatic kind of popular entertainment in which the major characters are either completely virtuous or exceptionally evil. In this genre one can find the jealous noblemen, the fair damsels in distress, and the villains in black. This genre also characteristically employs violence and sensationalism in its narrative and illustrations. However it is also true that this type of fiction was (and in the form of cinema continues to be) hugely popular, and it is tempting to speculate that perhaps its very popularity that has been its literary undoing.

Some would argue that it is time to look again at this genre. Cony Sturgis argued on behalf of this genre and mentions the Oberlin collection specifically in an article in Hispania that appeared in 1936. At their best, these novels make statements about their contemporary culture, and Catholicism in particular. One of the best known authors of the time was the prolific Manuel Fernandez y Gonzalez, who used political settings ranging from the governments of Carlos V and Felipe II, to critique the abuse of power and social inequality in his own day.

It is also interesting to observe how in the novels, rigid class lines become blurred by marriages from a variety of different economic and social backgrounds. Female characters also figure prominently in the genre. While the guarding of a woman's virtue by men is frequently used as a plot device in the novela historica, female characters are often also distinguished by their power, sometimes killing their enemies on their own.